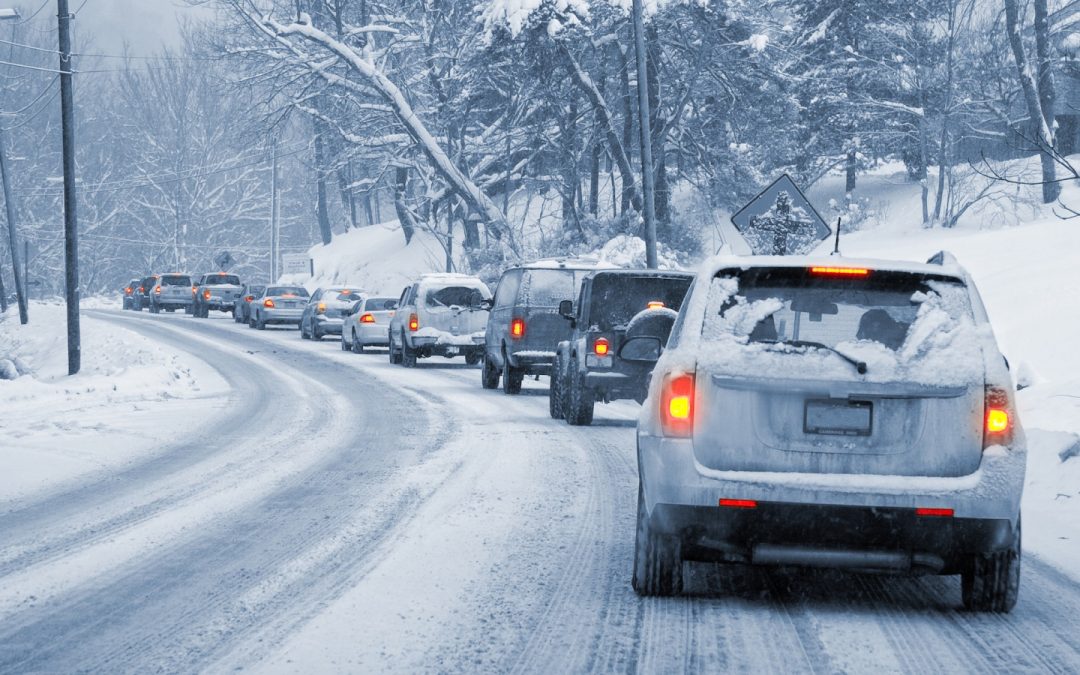 Most drivers fear the first snowfall of the year, and for a good reason. Research has found that collisions are 14 percent more likely to be fatal on the first snowfall, and that’s only the beginning of a long, hard season for drivers. There are, however, four common causes of winter auto collisions, and if we’re all aware of them, we can be doubly careful when these situations arise.

Most of us who drive in the winter take great care regarding winter storms, ice, and stormy conditions, but we can become complacent if we don’t keep safety at the top of our minds. So, our team has gathered info on four common causes of winter auto collisions and how to avoid them and avoid serious accidents.

Long a hidden winter hazard, many drivers aren’t looking for black ice and won’t realize they’ve hit a patch until it’s too late.

Black ice is caused by rising temperatures during the day that melts ground snow making the road surface wet. At night, however, the temperature drops, and the water refreezes but still only looks like a wet patch in the road. Another cause of black ice is dew or fog coming down and making the roads wet before the temperature drops—this version is especially sneaky because there’s no snow or rain prior to the ice forming.

How to handle black ice

If you find yourself on black ice, immediately take your foot off the accelerator and hold steady on the steering wheel to keep the car pointed straight. Many patches of black ice are small, and you may feel your tires grip the road fairly quickly. Avoid slamming on the breaks because this might cause your car to slide even more. If you can’t avoid a collision, try to gently steer away from the obstacle. Avoid turning hard, or you may find yourself in a spin-out.

Roads can become incredibly slippery during winter and cause accidents from fender benders to fatal collisions.

During a snowfall, cities will deploy salters to melt snow and ice and keep the roads open. However, the ice can turn the snow into slush, which can mix with oil buildup on the road, creating hazardous slick conditions.

How to handle slick roads

First, slow down. Your best bet on a slick and slippery road is to reduce your speed. Most drivers will also slow down, so do your best to drive at the same speed as the traffic around you. Again, if you find your car sliding, take your foot off the accelerator, avoid breaking, and hold steady or steer gently around any obstacles.

Drivers often deal with reduced visibility during winter, which can be one of the most dangerous weather conditions to deal with. Visibility is considered poor when you can’t see more than 250 metres in front of you.

Fog or driving snow coupled with darkness can cause poor visibility. Drivers may not see hidden intersections, a turn in the road, or a large animal that might have wandered onto the roadway. Other drivers may also be traveling at unsafe speeds.

How to handle poor visibility

As with slick roads, you first, slow down. Next, poor visibility often occurs in humid conditions, so turn on your defroster. For a better view of the road, use your fog lights. Avoid looking straight into the lights of oncoming traffic, though, because many of them may have turned on their fog lights. Since fog lights are so bright, they may dazzle your eyes as they get close. Instead, focus on the pavement in front of you, using the lines on the road as a guide for steering.

How Simplicity Car Care can help